What is a Photo Booth?

… as digital cameras, compact photo printers, and flat screen computer monitors became widely available in the early 2000s, people connected these together using a personal computer and software and created their own photo booths. Entrepreneurs began renting machines built along these lines at weddings and parties and the idea spread. From 2005 to 2012, interest in the United States for photo booth rentals grew significantly. By 2016 more people were searching for photo booth rentals than DJ rentals in 15 of North America’s largest cities. Photo booth rentals have also become popular in other countries such as Canada, Australia, and the UK. So far in 2016 there is an average of 226,000 monthly searches for a photo booth globally, this has risen by 48.9% since 2015.

Photo booths—in all their shapes and sizes—are becoming increasingly popular at events. And they may be providing more than fun and games. We explore three ways your event can benefit from a photo booth.

Having a photo booth at your meeting will give attendees—who may not know one another—a point of commonality and a simple conversation starter. In addition, if attendees get pulled into a photo booth shoot with attendees they don’t know, that’s sure to get the networking ball rolling.

Trade Show & Conference Attendees will want to share their goofy and fun photos will others— at the event and elsewhere. The BEST photo booth companies in the Tri-State Area like 212 PHOTO BOOTH have the moder technology to allow attendees to email the photos to themselves. That way, they’ll be able to share the photos on their social networks—including Twitter, Facebook and Instagram.

If the photo booth allows on-site photo strip printing, attendees will have a branded souvenir of the event, which could also surface on their social media outlets.

Pump Up the “Fun” Factor

Although there is more to a photo booth than entertainment value, the fun is definitely still a factor. The photo booth will keep guests busy and engaged—and hopefully, the novelty of the experience will have them talking long after they’ve left the event. 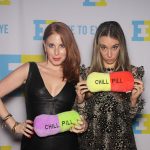